Li Ziqi, a famous Chinese food and rural-life vlogger with 14 million followers on YouTube, recently found herself sucked into this cultural battle after posting a several-minute-long cooking video on Saturday in which a dish that appears very similar to Korean pickled vegetables appeared.

Shortly after her video was uploaded on Saturday, Koreans flooded the comments section on YouTube and Facebook, criticizing her for misrepresenting the traditional Korean dish as Chinese. 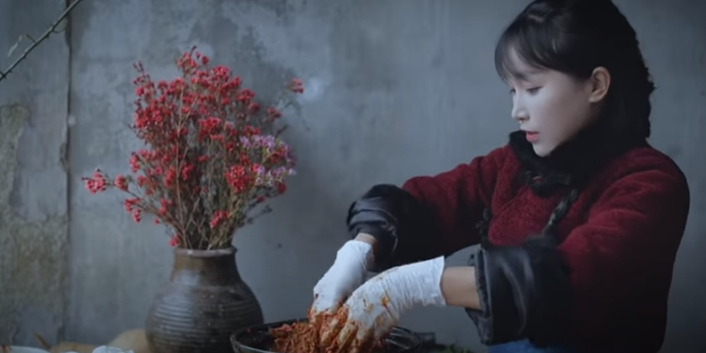 "I'm not saying anything about making it, but shouldn't you at least write that it's a traditional Korean food? When I saw the cabbage split in half I thought, 'no way,' but after seeing it being seasoned, I couldn't believe my eyes," read one Korean comment.

While China has its own pickled vegetable dish—pao cai—the preparation method and ingredient selection differs from kimchi. The choice of ingredients and method shown in Li's video were very similar to that of kimchi.

"As a Chinese from the Korean ethnic group, when I see a Sichuan person (Li Ziqi) making pickled vegetables, I wouldn't care about who invented this dish, but would just be surprised, 'Huh? You eat cabbage like this too!' This feeling increases my closeness to people in Sichuan province without any hostility. However, the situation is completely different for South Koreans," another netizen posted on Zhihu.